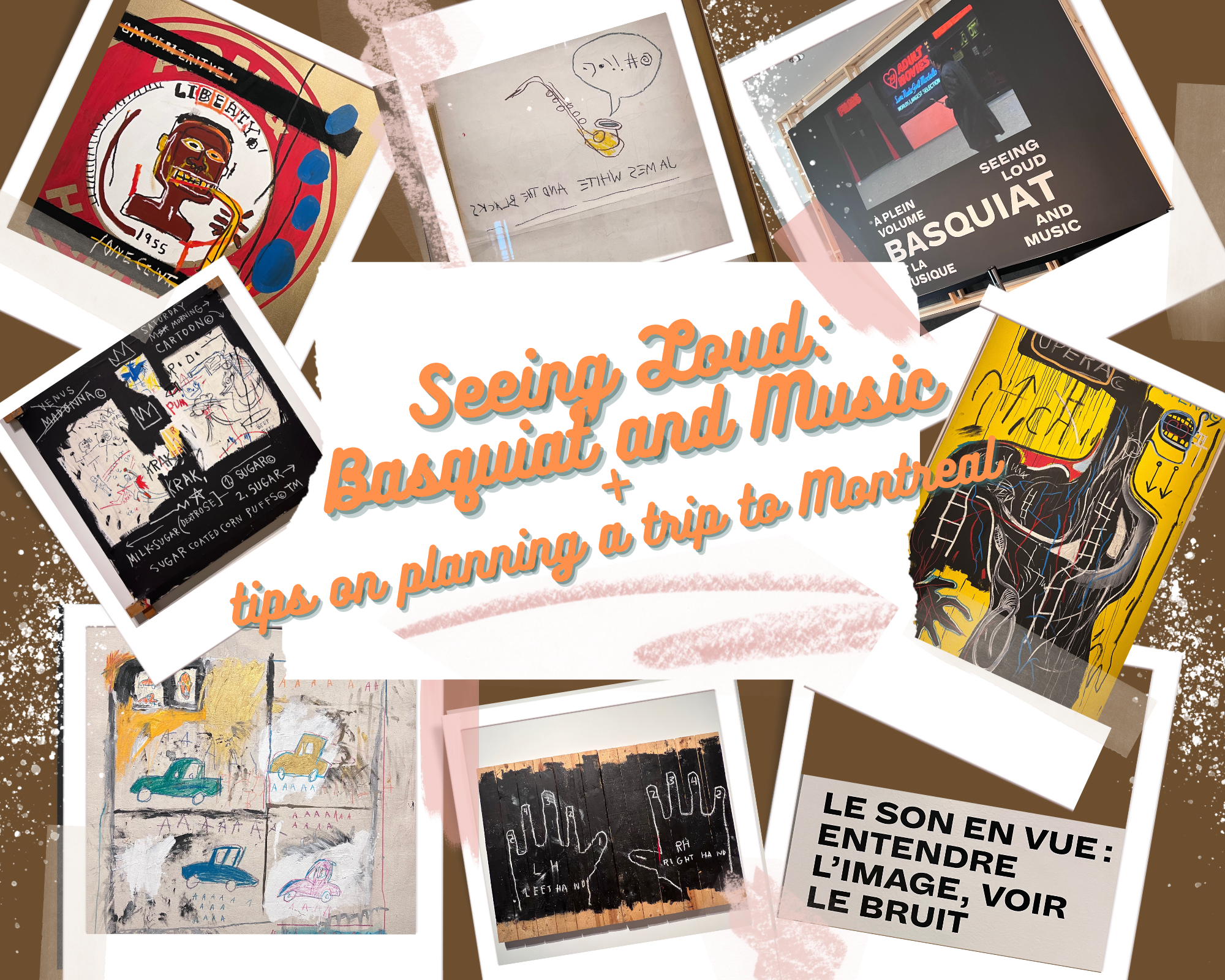 Going to Montreal to see Basquiat: Seeing Loud? We’ve got the itinerary for you

His art is loud, and now you can literally hear his music.

The Seeing Loud: Basquiat and Music is on now at the Montreal Museum of Fine Arts. If you are a fan of pop art and pop music, it is worth a trip to the 514. To help you plan your trip, we have rounded up the best place to stay, to eat and to relax right around the area so you don’t even need to call Uber.

But first, let’s take a sneak peak at the exhibition:

Jean-Michel Basquiat is considered one of the most important artists in the neo-expressionism movement. Born in 1960 in New York City and passed tragically at the young age of 27, his work continues to inspire and can be seen everywhere from the Brooklyn Nets’ current alternative jerseys to a multitude of Jay-Z lyrics:

“Yellow Basquiat in my kitchen corner,

(This lyric is referring to the famous Basquiat painting Charles the First.)

If Basquiat were still alive, he would not object to lending his name to song lyrics or his art on a basketball jersey, for he had never been picky about his medium. In fact, he once famously said, “For a while, I was drawing on good paper, but now I’ve gone back to the bad stuff. I put matte medium on it. If you put matte medium on it, it seals up, so it doesn’t really matter.”

This sans souci attitude does not affect the value of his art at all. Five years ago, his Untitled, sold for a record-breaking US$110.5 million dollars to Japanese billionaire Yusaku Maezawa. This meant Basquiat overtook his friend, Andy Warhol, to become the most valuable American artist.

Music was central to Basquiat’s creations. It is said that music was constantly playing as he worked. Musical instruments frequently appear in his work, and there are references to all genres of music: hip-hop, rap, bebop, jazz, classical music and even opera. To help us immerse into the music-filled world of Basquait, the museum has partnered up with Philharmonie de Paris’s Musée de la Musique to give an audio dimension to the exhibition.

For example, when you see Anybody Speaking Words, which seems depict how notes are formed inside the body of an opera singer, opera was playing in the background. There are also numerous sound clips and film footage to serve as  soundtrack and companion material to the more than one hundred pieces of artwork on display.

Seeing Loud: Basquiat and Music runs until Feb 10, 2023. In connection with the exhibition, there is a series of concerts, screenings and themed night time events. Last time Basquiat’s work was in Toronto was in 2015 at the Art Gallery of Ontario, and there is no word whether his work is coming back soon, so it is definitely worth a trip to Montreal. Montreal Museum of Fine Arts

To help you plan your trip, we have hand selected some hot spots for you that are all within walking distance from the hotel, which means you don’t even need to call Uber!

For downtown dwellers, flying Porter from the city centre Billy Bishop Airport is definitely the way to go. Concord Adex dwellers can take advantage of the airline’s complimentary shuttle, which picks up and drops off passengers at the Royal York Hotel, just a skip and a hop from the community.

The flight time is just a little more than an hour, and there are up to nine flights per day on weekdays. Furthermore, passengers are just required to arrive at the airport 60 minutes before their flight, compared to two hours suggested by other airlines at Pearson International Airport.

Sofitel Montreal Golden Mile is just 350m away from the Montreal Museum of Fine Arts. Recently celebrating its 20th birthday, the hotel is offering a special limited-edition anniversary package until December 20th, 2023 for an ultra-luxurious stay that includes a night at The Opera Suite, the hotel’s largest suite with the finest amenities, à la carte breakfast at Le Renoir Restaurant, champagne dinner at the Chef’s Table and an one-hour helicopter tour.

A French meal is in order when visiting Montreal Le Pois Penche,  Serving “the joys of French comfort food, Montreal-style” since 2007, it feels as if you are transported to a Parisian brasserie. Don’t forget to try their steak—they have been voted as one of Montreal’s best three places for steak frites by Tripadvisor (from $39).

And because one cannot do Montreal without devouring a smoked meat sandwich, just head to Reuben’s on Ste. Catherine W. The Original Reuben Sandwich ($25) is stuffed with nearly two inches of their famous smoked meat, melted Swiss, sauerkraut and secret sauce on pumpernickel bread. Served with a generous portion of fries, it is enough to feed two for lunch.

We get it, travelling is tiring. That is why you need to pamper yourself at the Guerlain Spa at Four Seasons Montreal, Quebec’s only Forbes ten-star hotel and spa. For facial, go for the Energy and Glow in Montreal. This signature treatment offers an energy boost for the face by rebalancing muscular, vascular and cellular energy. If you prefer a massage, the Power of Montreal is an exclusive body treatment that deeply massage your back, leg and arm muscles with easing of the joints.

After your treatment, don’t forget to try the included Kneipp Hydrotherapy Experience. Developed in the 19th century by Sebastian Kneipp, one of the Bavarian ancestors of naturopathic medicine, it begins with a hot and cold water circuit and ends with a walk on the reflexology trail. Be forewarned: if your acupressure points on your feet are congested, you will really feel it on this trail.

The above map marks all the places mentioned in this article. Have fun in Montreal!