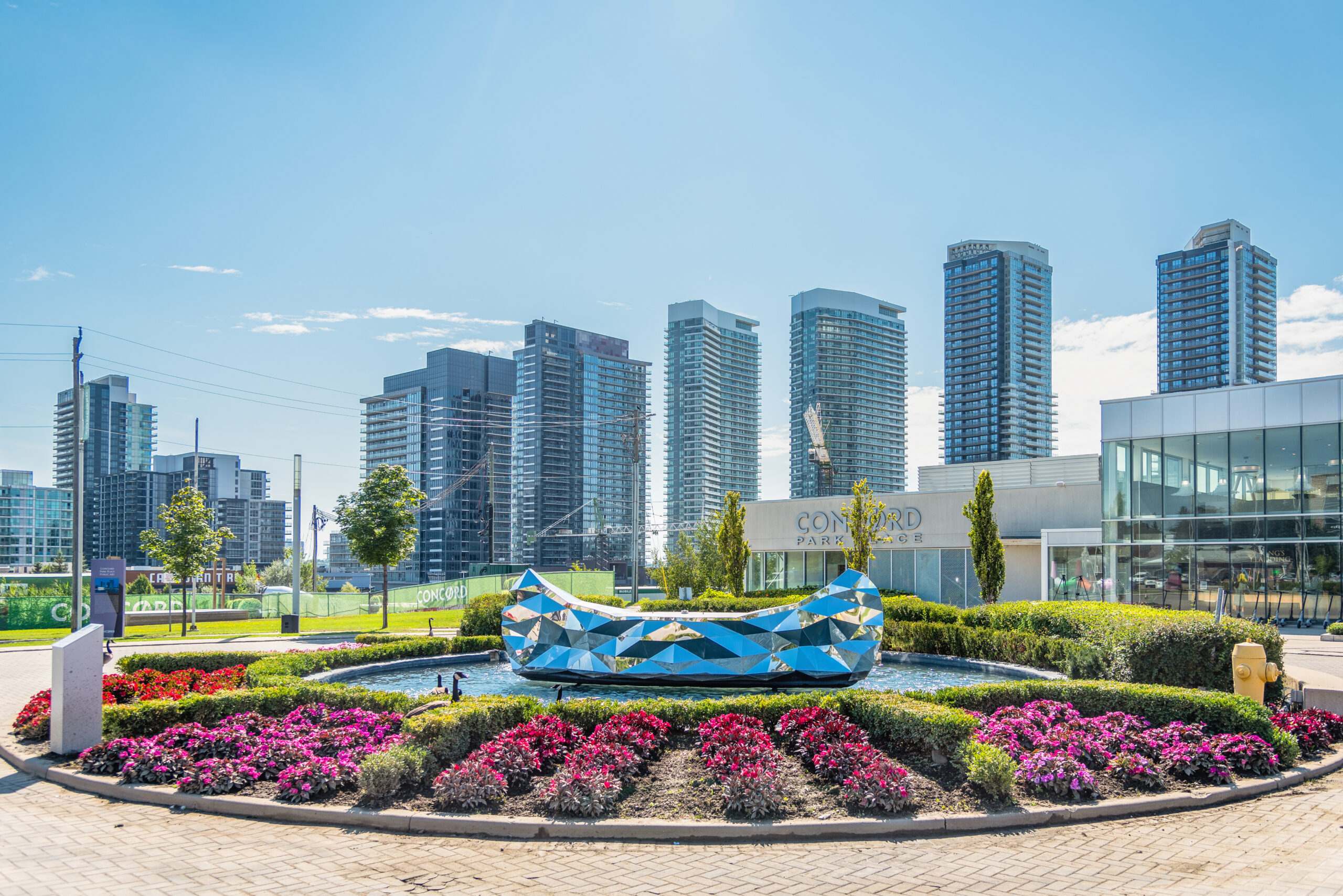 On August 16th Concord Adex unveiled the ArtWalk, the largest critical mass of public art in Ontario. Concord Park Place features 20+ commissions, of which 14 – including two from Indigenous artists Michael Belmore and Jay Havens – are featured in the ArtWalk.

Curated by Karen Mills, the walk culminates at a PopUp space where local artisans and artists will be featured on rotation with Works from Kelcy Timmons Chan currently on display.

Concord developed their public art program to make art accessible to all and to inspire local youth to appreciate art and become future artists. Concord Pacific’s public art plan for Concord Pacific Place, developed 30 years ago, is the model now referenced in all major cities across the country. Concord’s public art program has resulted in more than 60 permanent commissions of scale. Their mentorship program was created to assist new local and indigenous artists in pitching and communicating their art and culture to a public audience.

Inspiring the Artists of Tomorrow

Most of the nation’s public art is spread around urban centres to help animate urban settings. ArtWalk was recently developed to energize tomorrow’s youth by creating a tour to complete around the critical mass of art at Ethennonnhawahstihnen Park. The ArtWalk includes 14 commissions making it the most dense public art area in the province. “It’s great to see the private sector create engaging programming for families and youth. It’s great to have free access to Indigenous, Canadian and International art all just steps apart,” said Don Valley North, Councillor Shelley Carroll.

To engage youth to take in the entire tour, they have created a treasure map style app to be competed with fun art community and local retail prizing to be redeemed. Concord developed the program primarily to provide an inspiring programming option for schools and local families.To play, participants must download “Eventzee” from the Play Store or App Store, create an account and join the ArtWalk event with the game code “CONCORD.” Once joined, they can view the challenges list as well as the map locations for a list of the art pieces to visit. Once they have found an art piece on the list, they simply tap the challenge in the app and scan the QR code to complete. Once they have located and scanmed all 13 art pieces they can claim a prize at the Concord Park Place Presentation Centre.

“Seeing the cyclical nature of the program playout over the past 30 years has been rewarding. Using tech as a medium youth will appreciate and engage in is key in encouraging interaction. We hope this progressive and condensed presentation will inspire many and we plan to develop the app further,” said Terry Hui, President and CEO Concord Pacific Group. “Our mentorship program also funds up-and-coming artists to create art that future generations will appreciate.”

“I am delighted to see that The Peacemaker’s Canoe will have a new permanent home at Concord Canada House. This really is more than I could have imagined for this artwork as we originally conceived and built it for a temporary installation. I sincerely hope the people who get the chance to view this work in its new home will be inspired by the Haudenosaunee story of The Peacemaker and learn something new about the territory they call home. It is such an important story and there are many versions publicly available for people to read and learn from,” said Indigenous artist, Jay Havens.

About Concord Adex and Concord Pacific

Concord has been building Canada’s largest lifestyle-forward urban communities for over 30 years. Under the leadership of President and CEO, Terry Hui, Concord Pacific Place in Vancouver and Concord CityPlace in Toronto are the country’s two largest urban master-plans and are mostly complete. Over the past decade Concord expanded with master-plans in North York (Concord Park Place) and five master-plans of scale in western Canada. Concord also expanded to Seattle’s tech hub in the United States and London, UK including Marylebone and the completion of Principal Tower in the Principal Place neighbourhood, home to Amazon UK. These communities are renowned for their vibrant urban planning and have been emulated globally. The award-winning developer is Canada’s most substantial contributor of urban city parks and privately funded public art. In addition to their industry leading forward practices, including Concord BioSpace and EV Parking infrastructure and design, the company’s Green Energy arm generates twice the amount of energy needed to power all the homes they have built. Visit concordpacific.com for more information.

PrevPreviousImmerse yourself in the Majesty of King Tut and fork like an Egyptian
NextGoing to Montreal to see Basquiat: Seeing Loud? We’ve got the itinerary for youNext