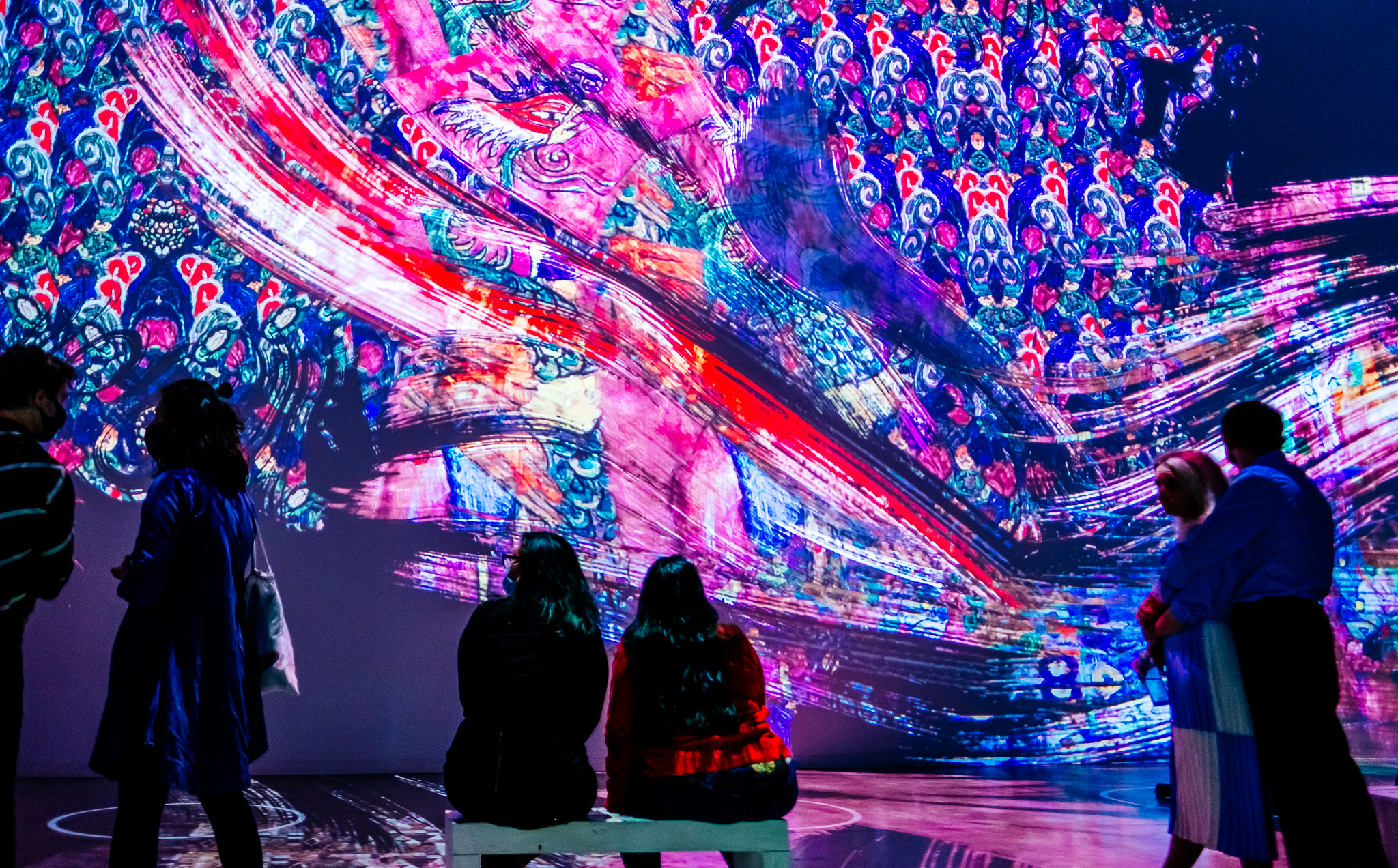 IMMERSIVE KLIMT: REVOLUTION is an unforgettable visual extravaganza that transcends time and place

If there is one cultural experience in downtown Toronto you should not miss this month, it is the world premiere of IMMERSIVE KLIMT: REVOLUTION, on now until Jan 16th at 1 Yonge Street, inside Toronto Star’s former printing press room.

From the streets of Imperial Vienna to the natural world of water lilies, vibrant blooms and mermaids, to the majestic ‘Tree of Life’ and other masterpieces in the artist’s acclaimed Golden Phase, the vivid imagery, bold colours, artful animation and spectacular soundscape of this immersive experience is like stepping into a kaleidoscopic dream.

Gustav Klimt’s animated works is housed in the vacant five-stories of the 1 Yonge Street building that previously housed the Toronto Star printing presses. Who would have thought that the once drab industrial cavern would become one of the city’s biggest art space?

The main gallery encompasses 600,000 cu. ft. and the facility features three additional gallery spaces alongside offices, two gift shops, and a café. The show runs alongside Immersive Van Goh and Illusionarium in the gallery that previously housed Gogh by Car.

Klimt’s works is a natural fit for the grand scale and visually stunning effects of an immersive installation. He had always favoured oversized canvas for a commanding presence— his most famous and storied work, “The Kiss”, stands at a remarkable 1.8 metre, as did “Goldfish” and “The Three Ages of Woman”. The use of gold leaf and the abundance of graphic patterns was intended to create a dazzling effect.

Immersive Klimt producer Svetlana Dvoretsky agrees. “Klimt was a bold provocateur, particularly in his daring portrayal of the female form,” he said. “The exhibit bathes the viewer in the sensual colours and golden glow of the period while also evoking the thrilling energy of times of change.

This show is brought to us by the same team behind Immersive Van Gogh. It is created by Massimiliano Siccardi from Italy, a world-renowned master of digital art who has been pioneering immersive exhibitions in Europe for 30 years.

While Immersive Van Gogh embraces the soft and dreamy flow of post-impressionism, the new show pulsates with bombastic energy. “Our inspiration for this new exhibit finds its origin in the spirit of rebellion of the time and in the contrast between classic and modern,” comments Siccardi.

The use of cutting-edge animation techniques such as motion design, puppet animation and 3D sculpturing means that we can see how traditional and contemporary graphic styles literally meet and collide right in front of our own eyes.

Siccardi’s stunning visuals are accompanied by a propulsive soundtrack designed by multimedia composer Luca Longobardi, renowned for marrying classical and contemporary genres. The foundation of the score for Klimt is Longobardi Schonberg’s Verklarte Nacht. From that foundation, Longobardi builds a soundscape of dramatic contrasts that include an aria from Madame Butterfly, our favourite — Italian cellist Euleteria’s Theme from Symphony No.7, and Longobardi’s own compositions including a piece of contemporary techno that brings the experience to a close.

“With Klimt, Massimiliano and Luca have raised the bar yet again, extending the possibilities of the immersive art experience even further,” says producer Corey Ross. “They are a bit more playful in this show with how they animate Klimt’s work – the show has a really celebratory energy that will absolutely meet the moment in the fall as the city continues to come back to life.

It is not happenstance that the world premieres of both Immersive Klimt and Immersive Van Gogh are set in Toronto. The company behind these unique events, Lighthouse Immersive, is founded in Toronto, and brings together two of our city’s preeminent production companies – Starvox Entertainment, Canada’s fastest growing live entertainment company responsible for bringing hit shows like The Art of Banksy to Toronto, and Show One Productions, a full-service production presenting concerts with high-profile classical musicians, opera stars and orchestras.

In the last year, the Canadian company has announced new galleries in 18 U.S. cities, of which currently Chicago, San Francisco, and New York City are now open. Galleries in Los Angeles, Las Vegas, and more will open through 2021. To date Lighthouse Immersive has sold well over 2-million tickets to Immersive Van Gogh across North America, making the exhibit the #1 selling art show in the world. Art Net also recently commented on the wave of immersive galleries that it is “one of the largest coordinated art phenomena of all time.” The company has definitely put Toronto on the art map of the world.

In accordance to government regulations, a proof of vaccination along with a piece of photo identification is required to gain entrance into all exhibits.For more information, hours of operation and ticket sales, visit immersiveklimt.com.